​ISCh Bleuroyal Back To Business "Boss" 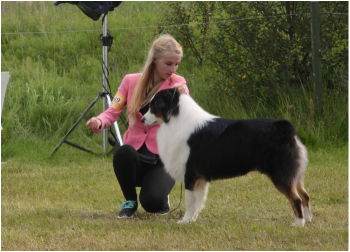 Boss was taken from us far too soon. He was co-owned with Guðný Isaksen and he lived with her and her family. It was a great loss when he left us but he got sick suddenly and left us far too soon. He and Guðný had a unique relationship and he could not have lived at a better home than with his "girlfriend" <3

Boss was born in Chile in March 2013. He came to Iceland with a short stop in Germany in December 2013 and out of quarantine in January 2014. He had a long travel behind him as he is born in Santiago, Chile, and comes from Bleuroyal Kennel.

Boss was a gentle and sweet boy and adapted well into his new home and his big family here in Iceland.

He took part in few shows here with good results. His biggest achievement was in summer of 2015 when he won open class, became best male, Best of Breed, won group 1 and became reserve best in show with his second CAC and first CACIB. He became an Icelandic Champion, ISCh, in 2018.

He leaves one litter behind him but in February 2019 6 puppies after him where born at Heimsljósa kennel. We are looking forward to follow their steps into the future.