Reese "Thornapple Seduction" was our first Australian Shepherd. We brought her from the United States in February 2011, she is born on August 10th 2007. Her breeders are Amy Garrison, Ellen Brandenburg and Coleen Zartman, their breeding is named Thornapple. Reese had taken part in few shows before she came to Iceland and you can see pictures from them and here growing up here.

Reese adjusted well here in Iceland and played a big role in our family her whole life with us as she was the queen of the house. She took part in her first show in June 2011 and with good results. She won her group and was 2nd best bitch of breed, with cc. At the November show same year she won her first BOB, with CC and CACIB.

2012 was a puppy year for our Reese and she had a total of 19 puppies in 2 litters. So she took time off from shows after that until autumn 2013. She got her third CC in February 2014 and became an Icelandic Champion. In August 2015 she became 8 years old and took part in the September show as a veteran for her first time. She did great at that show became 2nd best bitch after her daughter, BOB veteran and was selected top 6 BIS veteran. Great start for her as a veteran :)

Reese passed away in August 2019 and we still miss her every day. She was one of a kind and we will always remember her as the queen she was <3

We bought Chase "Thornapple Good to Go" from the United States. He came to Iceland in February 2012 and to us in March. He became 4 years old just before he left the States. He is like Reese from the Thornapple Kennel in Michigan and his breeders are Ellen Brandenburg, Amy Garrison and Lisa Penton.

Chase had done good in shows in the States before he came her and he had become US Champion and at the August 2011 show he became Icelandic Champion and has got his first CACIB.

Chase has like Reese adjusted well in Iceland and is every ones favorite. He is sweet and gentle dog who charms everyone with his great spirit. He became one of our family at the moment we picked him up at the airport "smiled at us and hugged us".

Chase passed away in September 2020 and we still miss her every day. She was one of a kind and we will always remember her as the queen she was <3
​
​TOP AUSTRALIAN SHEPHERD 2016
TOP VETERAN 2017 AT THE ICELANDIC HERDING CLUB 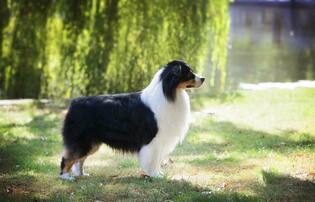 Marley now lives in Germany with our co-owner and handler. They took part in their first show in Germany in the beginning of June with great results. He became BOS, with his first German CAC but he needs five to become VDH CH and he also earned himself a new title Saarland Sieger 2017.

Izzy is from the first pure Thornapple bred litter here in Iceland, and is after our Reese and Chase, "The Movie litter". All the puppies from that litter were named after movies.

Izzy is an amazing bitch. She is a fast learner, powerful, considered, curious, loves children, good with other dogs and loves to be able to take part in our lives and everything that goes on at home, she is a true party animal. She took part in her first show in February 2013 and did excellent. Got great review from the judge and was BOS puppy in puppies 4 - 6 months old.

After puppy classes she did not go to shows for over a year. When she went back into the ring she did excellent was second best bitch after her mother on an outside show in June and on the International show in September she was BOB and BIG4 with her second CK, first Cacib and Crufts 2015 qualification. In September 2015 she was BOS, got her 3rd CACIB and got Crufts 2016 qualification.

Misty arrived in Iceland in September 2014 and came out of quarantine a month later. She lived with us for her first years here in Iceland but lives now with our daughter Karen Ósk and her boyfriend.

She is born in Croatia in February 2014 and her breeder is Marko Ljutic, Mangry's Australian Shepherd. She left Croatia in the beginning of May to Belgium where she stayed with our dear friends Ine Vanseer and Nadine Vannylen until we picked her up in September and took her back to Iceland. We can´t thank Nadine and Ine enough for taking such a great care of our little princess :)

She took part in one show in Belgium before she came to us and was BOB and BIS3 in puppy class. She has taken part in few shows here since she came and always got excellent and great reviews.

She is just a dream and fits so well with our gang. She loves life and we love her she has great presence, is great with other dogs and children and we are totally completely in love with her. She is a quick learner and always willing to please you. 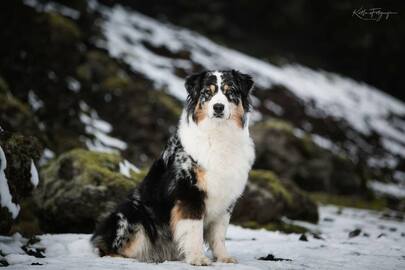 Melody is born in France but stayed with our friends in Germany from the beginning of July until we picked her up in the end of September 2016 and came out of quarantine 4 weeks later.

As said before she is born in France and is from Alyson Ferrier which breeds under the name of  De La Vallée D'Eska. We are so grateful to her for trusting us with this little gem. She is a great personality, open and joyful.

Sofie is the newest addition to our family. She comes from the same breeder in France as our Melody. I went with our Theodóra to pick her up in France in February and she stayed with her and Marley until June when I picked her up and brought her home to quarantine. In July she finally came home to us.

She is such a funny girl, open and a true prankster and Marley and Theodóra enjoyed having her with them for this time.

Despite being from the same Breeder as Melody they are not related so with her as well as Melody we get a lot of new lines into our breeding.